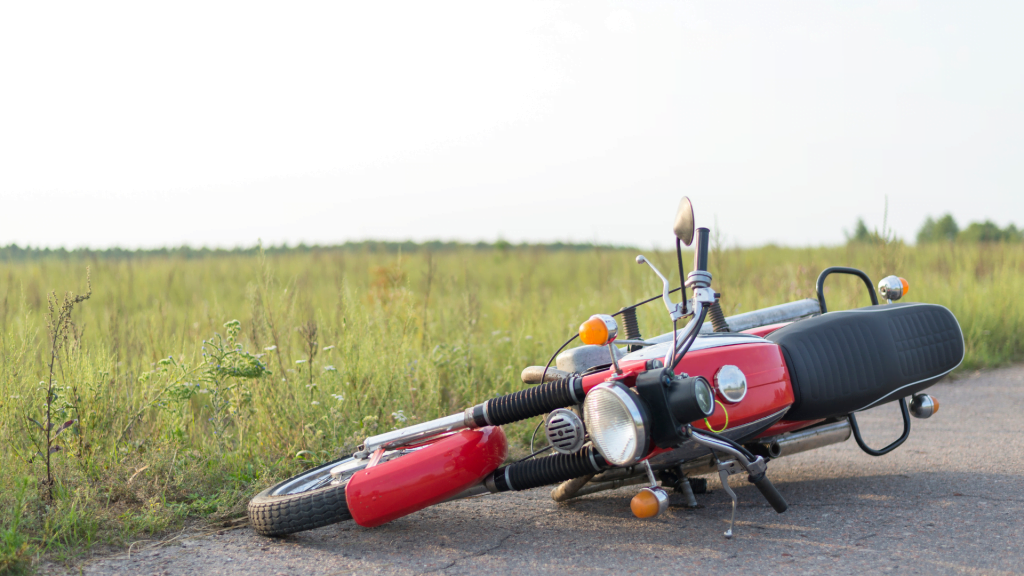 What Damage Can Result to a Bike When It’s on Its Side?

MotoGP racers tend to put their bikes almost horizontally during a turn more often than not. However, suppose you’re a regular street bike rider, there is virtually no reason for you to put your bike horizontally unless:

Laying a bike on its side is terrible for your motorcycle because:

The engine, carburetors, cylinders, crankcase, bearings, and other engine components can be damaged if the bike is left lying on its side.

What Is the Worst That Could Happen?

Ever heard of hydrolock? It occurs when a liquid with a volume greater than the volume of the cylinder at its maximum (the end of the piston’s stroke) enters the cylinder. Coolant, water, battery water, oil, or whatever liquid seeps through cannot be compressed, causing the piston’s travel to be hampered and resulting in a mechanical failure.

This is a damaged piston after a hydrolock:

How do you know if your engine is hydrolocked?

ALSO READ  Where Can I Ride My Dirt Bike Legally? Consider These Laws

How Do You Fix a Hydrolocked Engine?

Engine damage as a result of hydrolock is an expensive repair endeavor. It can cost you anywhere between $3,000 to $8,000.

The mechanic will attempt to remove any liquid from the affected regions before any repair or replacement attempt can be made. The spark plugs will be removed, then the engine will be turned over. This should clear the liquid from the flooded areas within the motorcycle’s engine.

How Long Can You Put a Bike on Its Side?

Not more than five minutes. Otherwise, gravity will do its job, and fuel, oil, and battery acid will start to leak into the engine. If it stays on its side for a long time, a repair will be in order. For this reason, all motorcycle repairs are done with the bike in the upright position.

If the bike has been on its’ side for more than five minutes, do not repeatedly try to start the bike. Instead, remove the spark plugs, drain the oil, and get it replaced. Hopefully, this is the only issue.

After that, let it rest for a couple of hours to ensure everything is okay. You can start your engine again. Smoke might come out of the exhaust pipe, but it will be fine.

Is It Possible to Transport a Motorcycle on Its Side?

As much as possible, you should never transport a motorcycle on its side because this will cause damage. Removing the battery and draining all fluids is the best course of action to minimize potential damage if you need to transport a bike on its side (perhaps due to space limitations). If there is any remaining fuel in the tank, it must be pumped out. The same thing goes for engine oil — it also needs to be drained.

If you’re transporting a bike in a van, truck, or ferry, put it in gear, lock it to the left side, and leave either the kickstand or the center stand out, depending on how much space the bike takes up.

Then tighten the strap so that the bike is perfectly upright with the wheel facing toward you and the handlebars perpendicular to the ground. Consider padding your bike with suspension blocking straps or soft foam to relieve pressure on the plastics.

Laying down a motorcycle for a long time means it is temporarily not rideable. It should not be ridden until fully inspected (and repaired). Check for cosmetic damage, fuel leakage, engine oil, and battery acid if you have a bike lying down. This will help ensure that you do not damage the motor by starting the engine and causing harm to it.

As a rider, you have to know your bike — even if it’s a simple scooter. Whatever brand or model it is, you have to be able to maintain it. The same goes for any vehicle. If you don’t know how to take care of it, you will eventually run into problems. If your pre-ride check shows evidence of leakage and you have no idea how to fix it, it’s best to bring the bike to a mechanic.

A bike is an expensive investment, so knowing how to take care of it properly is critical to its longevity. I hope this article was able to clarify the point of not putting your bike on its side for more than five minutes. Doing so would result in an unnecessarily expensive repair, which could have been avoided if you had the information above.

I’d like to point out that this is not a how-to guide for laying down a motorcycle. If you need to do it for whatever reason, you should consult a professional.

Thank you for reading this article, and I hope you learned something. If you have any questions, please leave them in the comments section.

PrevPreviousWearable Motorcycle Airbags – Are They Worth It? [Video]