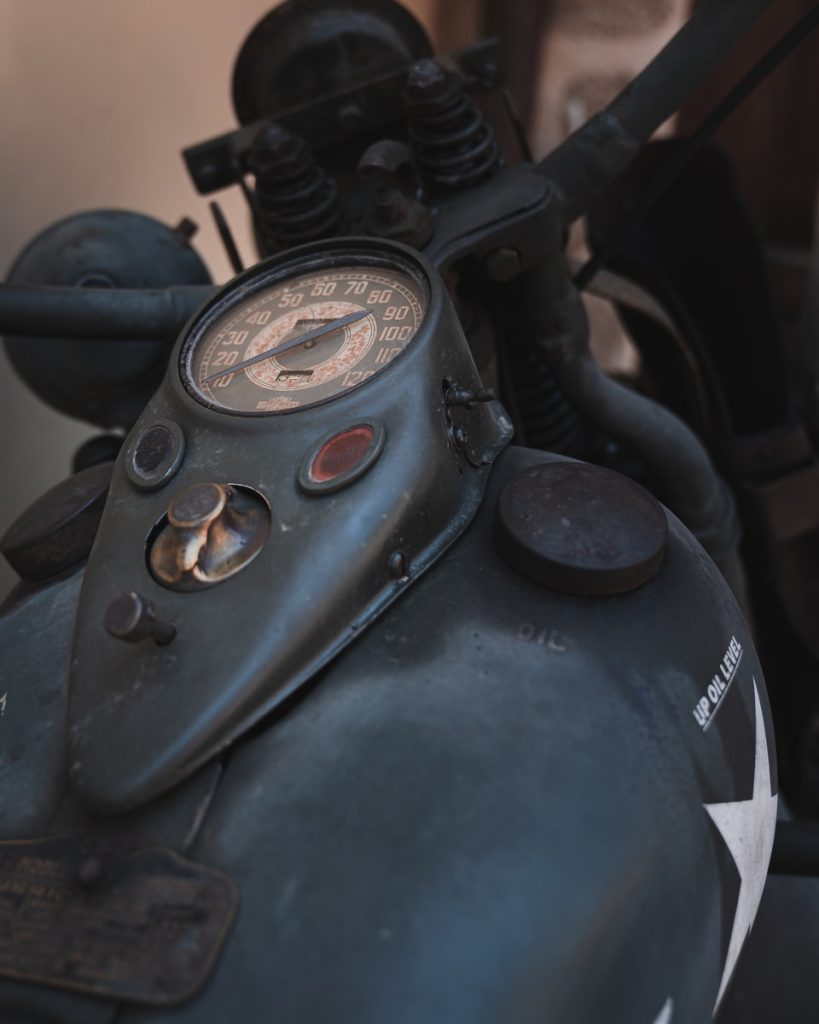 Motorcycles are like other automobiles. When you use it too much, it wears out. When you don’t, it still wears out. The only difference, of course, is that it wears out faster when dormant than when in use. However, as humans, we can never tell where the journey of life takes us. From time to time, we’re faced with different commitments that leave us with little or no time for other things- including our dear motorcycles.

Tips For Properly Storing Your Motorcycle:

These commitments could be family, business, relationships, volunteerism, health, or even natural disasters. This is why we’ll be answering the question- how many days can a motorcycle sit without starting? This article also contains helpful information on how to revive a motorcycle that has been dormant. And ways you can store your bike if you’re planning to go away for some time.

How Many Days Can a Motorcycle Sit Without Starting?

A motorcycle can be stored with gas for 6 to 8 months.

Over the years, many people have claimed that they’ve left their motorcycles or other automobiles for a long time. And nothing happened to them. But how accurate are these claims? Several factors could’ve made their claims possible. Some of them are;

• They preserved it unknowingly. We engage in many activities daily without knowing what they are called. It’s the same for motorcycles. Some people take time to clean their motorcycles before traveling or abandoning them. Some wear protective clothing on it. Others drain out the fuel, repaint it, and other preservative measures.

• The motorcycle has been receiving proper maintenance. The more you care for machines, the longer they tend to last. By correctly maintaining a bike, you could save its parts from wearing out. Some maintenance tips are lubrication, timely servicing, checking your tires frequently, etc.

• The motorcycle’s model. Depending on the brand, some motorcycles have longer lifespans than others. They are made of solid elements that can withstand harsh conditions. This is quite common in old motorcycle models.

• The season of the year. This is also slightly related to the motorcycle’s model. If protected well, some motorcycles can survive winter. However, it’s rare for motorcycles to remain the same after being dormant all summer.

If all these things are taken out of consideration, a motorcycle may start developing major faults after a month. While some of these faults are correctable after one month, they may not be in years. The best thing to do is not risk it at all. You don’t have to take it on a long ride every day. You could start the engine and leave it running for a while so it could heat up.

If possible, take it on a ride at least once weekly to ensure it’s working fine. However, if your motorcycle has been sitting idle for too long, there are ways to fix it. But before that, let’s look at the possible faults that could arrive from leaving your motorcycle dormant.

What Happens When You Leave Your Motorcycle Dormant?

If you store your motorcycle correctly, you may hardly be able to tell how long you’ve left it when you return, as it will be up and running smoothly. On the other hand, if you don’t store it properly, you’ll have difficulty restoring it to shape. Some of the significant consequences of leaving your motorcycle dormant are;

ALSO READ  Where to Buy a Dirt Bike? Used vs New Options

Let’s start with the most common consequence of machine dormancy. When any machine is left for a long time without proper care, it begins to rust. This is because the machine is not being lubricated as it should be. The same thing happens with motorcycles.

When oxygen in the air reacts with iron, the reaction forms an iron oxide, popularly known as rust. Rusting increases the friction between the motorcycle parts, which in turn, reduces the speed. This does not happen during regular use because the formation process is disturbed by motion.

Tires are another thing to worry about if you’ve left your motorcycle dormant for months. Flat-spotting is a common phenomenon to tires that have been idle for too long under their body weight. When motorcycles are not in motion, their tires support the machine’s weight. This makes part of the tire touching the floor wear out and flat.

Extreme temperatures could also aid flat-spotting. It is suffered chiefly during winter when the environmental temperature becomes freezing. The flat-spotting could be temporary or semi-permanent depending on the motorcycle’s size, model, and parts.

The computers and other wires are still functioning, thereby discharging the battery. After an extended period, the whole battery eventually drains. This is why automobiles left dormant for years do not start when they are turned on.

You may have noticed leakage after leaving your motorcycle for too long. How did that happen? The shrinking of gaskets and seals causes most leakages. Gaskets are the elastic components of your bike that fill in the space between two surfaces. Gaskets start to shrink if not put to use for a long while. This is because they need to be constantly heated and expanded to become tighter.

How to Revive a Motorcycle That Has Been Dormant

If your motorcycle has been dormant for a while, it may not work immediately after you start it. However, don’t be too quick to dump it. There are some solutions and steps you can follow to revive your bike. These are;

After returning to your idle bike, the first thing to do is to check it properly. There are two types of assessments you should do. The first one is the surface assessment. This is where you’ll check the tank for chipping, the gaskets and seals for shrinking, and the tires for flat-spotting. After that, you move to the second phase, the in-depth assessment. Here, you’ll be checking the battery, oil, chains, and even gear.

ALSO READ  Can You Ride a Motorcycle While Pregnant? Safety First

While doctoring your motorcycle, you must have diagnosed it with some problems. Now, it’s time to fix them. Before anything else, you should charge your battery. It would’ve been drained while you were away by the electrical components of your motorcycle. And even if it’s not dead, it won’t have enough power to run the bike efficiently.

There are several ways to charge a motorcycle battery. These depend on the type- lithium or lead-acid- the state the battery’s in and the urgency. You could use a battery charger, jumpstart the battery, or push start it. However, do not get used to recharging your battery. If a battery drains over and over, it could shorten its lifespan.

After charging your battery, get out there and buy new tires. If your motorcycle were not correctly stored, your tire would most likely be affected. Instead of trying to fix the flat spots, replace them totally with new ones. Apart from saving you from possible hazards like tire explosions, it will also give the bike a contemporary feel. It also does not have to be new ones. They could be extras stored somewhere in your house.

People still argue whether it’s right to add new fuel to the stale one or not. While there’s no yes or no to this, there are factors to consider. First, how long the fuel has been in the fuel tank. If you’ve left your bike dormant for more than a month, the fuel has probably become useless.

Another thing is the amount of existing fuel in it. If it’s very little, you can mix it with new fuel. Also, check the condition of the fuel. If it has thickened, then it’s up for disposal. You should consider replacing the fuel lines if they’ve become cracked. And add a fuel stabilizer.

A part of motorcycle dormancy is chipped tanks. Sometimes, it may be just the clear coat that peeled. In that case, you can fix it with grit sandpaper. The grit sandpaper is to wipe off the former coat before adding a new one. However, if your paint has been affected, you may need to repaint it—another chance to define it how you like.

Your carburetor is another motorcycle element that has most likely accumulated dirt. Not just dirt but moisture and gunk as well. If you want your bike to perform well, strip the carburetor clean. This way, it can adequately supply the ignition engine with a neat mix of fuel and air.

• Take your bike for a walk.

This is usually the last thing to do in this scenario. Though it may be the last, it’s not the least, as it can help you discover other faults in the motorcycle. You can monitor the gaskets and seals through your walk and make other quick fixes.

ALSO READ  Should I Buy a Motorcycle? [Video] Watch This First!

These steps are usually all you need to make your bike come alive again. However, if all these measures fail, it’s probably time to visit an auto repair shop. And it would be best if you did that quickly before it worsens. Even if these steps work, you’d still need proper servicing, which should be done by a professional.

How to Store Your Motorcycle While It’s Not in Use

If you’ve never had to leave your bike unprotected for months or years, good for you. But if you’ve done it before, it doesn’t have to be that way again. Your motorcycle will always remain in shape with these basic steps no matter how long you leave it. (Not for centuries, though)

The first and easiest thing to do when storing your bike for months is to protect your tires. You can do it by keeping your motorcycle on its center stand. This way, the bike’s weight is not resting on the tires but the stand. If your motorcycle does not have a stand, you can get a motorcycle jack. Position it well in the center for stabilization. Your tire will be free of flat spots when you return.

Stale fuel isn’t suitable for your motorcycle. Before abandoning it, drain all the gas from it. Otherwise, it could cause corrosion to your motorcycle’s engine and even the fuel system. If it’s so hard to drain the fuel, add a fuel stabilizer to it. It will prevent the fuel from thickening while you’re away.

Unlike the fuel, you don’t need to drain your oil. As a matter of fact, you need to leave clean oil in your engine for lubrication. The oil will degenerate on its own. However, do not forget to change the oil when you return to the bike.

It’s always better to keep your motorcycle inside. Either in the garage or somewhere safe from rodents. However, if inside options fail, you can keep them outside. But do not forget to wear the bike a good quality covering. This is to prevent the effects of atmospheric change and UV rays. Other protective measures are quality antifreeze, a battery tender, and turning off petcocks.

Leaving your motorcycle for months or years isn’t the problem. The problem is when you do that without protecting it first. The solutions above may work the first few times you try them. However, not protecting your bike has long-term effects on its health. Also, proper bike maintenance will save you from lots of future stress. And insure you against the harmful effects of unplanned dormancy.