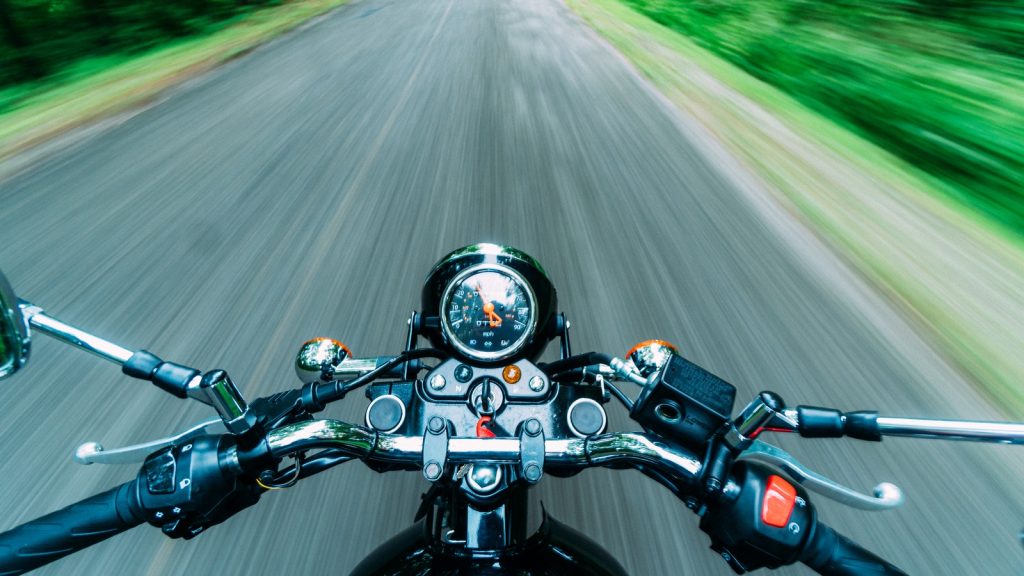 There have been several misconceptions about the RPM over the years. Many motorcycle riders, especially new ones, still mistake it for different things. Some say it is the speed at which the tire moves or the rate that determines the gearing. While RPM does have something to do with the gearing, as we’ll see later, it isn’t that simple.

As a motorcycle rider, you need to understand the concept of the RPM first. After that, you can keep track of your bike to determine what RPM suits it. And though there’s a range of suitable RPMs for different motorcycle activities, it’s always better to be specific about your bike.

What Is an RPM?

The revolutions or rotations per minute of the crankshaft, commonly known as RPM, is the speed at which the crankshaft rotates to give power to the rear wheel. Every motorcycle except old vintage ones comes with a tachometer. A tachometer is an instrument used to measure the RPM of a bike. Some older motorcycles have analog tachometers. However, contemporary ones are primarily digital.

You’ll notice that the value on your bike’s tachometer fluctuates from time to time, especially in riding. This is because several factors contribute to the speed of the crankshaft. The crankshaft is in the heart of the engine. In most automobiles, including motorcycles, it is attached to the down of the engine block, at the midline between the engine’s cylinders. A crankshaft works similarly to a bicycle’s crank and pedals. However, it is an upgraded, more sophisticated version of it.

The crankshaft is what converts the linear motion of the piston to rotational. This is because it is directly connected to the piston and thereby works with it to ensure enough power for the engine. As the speed of the crankshaft increases, so does the engine’s RPM as well.

How does the RPM affect the movement of the motorcycle?

In every motorcycle, the sprockets of the engine and the rare wheel are connected by a metal chain. This chain transfers the rotation of the crankshaft to the rare wheel. And this is what causes the forward movement of the bike. However, this process is not complete without the gearbox. The gearbox serves as the control and the middleman between the crankshaft and rare wheel.

As the gear increases, the RPM of the engine reduces. This is because, at a higher gear level, the rotation of the crankshaft needs to become slower to maintain the speed of the motorcycle. If your tachometer displays a very low RPM, your gear could be the problem. You’re probably riding at a significantly high gear that needs a downshift. However, you’ll need to upshift your gear if your tachometer reads a high engine RPM.

RPM and fuel consumption are also closely knit. As the RPM increases, the motorcycle will consume fuel quicker to keep it running smoothly. One way to tame this fuel consumption is by riding at a medium RPM range. However, you should be careful when picking an RPM as the ‘ideal’ one to work with. This is because motorcycle RPMs are relatively high compared to cars and other four-wheeled automobiles.

Some reasons for this include the large diameter of the engine’s cylinders and short strokes of the pistons. The piston can complete its cycles quicker, resulting in a high RPM. Also, motorcycles need a high-power engine for the performance it was built for. This isn’t bad if you control your bike’s RPM well. If you don’t, it could become too high or too low. And both of these cases have extreme consequences on the lifespan of the motorcycle’s engine.

ALSO READ  What does one per-center mean in motorcycle clubs?

What is the Right RPM for Riding?

This is precisely where many riders get it wrong. While there’s a safe range of RPMs for motorcycles, it depends on the bike. Some people claim to have driven their motorcycles at 1500-2000 RPM. However, if this value is applied to some motorcycles, it could cause them to enter the redline. Some riders also claim to ride at 5000 RPM and above, which could cause lugging in many other motorcycles.

The ideal RPM range for your motorcycle depends on the maximum RPM your bike can reach. Divide that number by half, and there you have it. This value is usually around 3000-8000 RPM in many motorcycles. However, driving at half your maximum RPM for a long time could affect your bike. Also, it is not relative to one gear. Here are some things to consider when deciding on your riding RPM.

• The type of motorcycle you use. Most contemporary motorcycles can accommodate a very high RPM compared to vintage ones. The model of the bike also matters. One way to discover what’s right in this case is to ask people who use the same model as yours.

• The gear you’re riding in. As we mentioned earlier, low RPMs work well with a high gear and vice versa. If your tachometer shows you’re going above the ideal range, you’ll need to upshift your gear. Downshift if the reverse is the case.

• Listen to your motorcycle. If your motorcycle engine starts making funny noises while riding, you’re most likely crossing the limits. To get the ideal RPM range for your bike, you’ll need to study it for some time.

• Where you’re riding matters too. Riding on the highway is very different from riding in the city. In these cases, you may need to adjust RPMs to avoid redlining or lugging, which we’ll talk about later.

Idling is a very different state from riding. Here, the motorcycle is at rest but still very active. The engine is turned on, and the crankshaft rotates, showing the RPM value on your tachometer. The gear is also neutral. It often happens when you’re warming up your motorcycle. It’s also idling when it’s going through repairs that require it to be turned on.

Fluctuation of the fixed RPM value while idling is normal for seconds or a few minutes. However, it becomes abnormal if it frequently fluctuates while the motorcycle is idle. And if the fluctuations take longer to restore to the original value, your bike needs a check-up. Several things could cause your idling RPM to fluctuate. Some of them are;

• Clogged air filters: people often underrate the effect air filters have on motorcycles. Since it’s just a minor part of the bike, many people do not even check it. While your air filter is cleaning up the air that goes into your bike, it also needs to get cleaned. Once the air filter is clogged, the motorcycle won’t receive enough air to perform well. Dirty air filters will also contaminate rather than purify the air leading to malfunctioning.

• Disproportionate air-fuel ratio: for fuel to power a motorcycle, it needs a proportional amount of oxygen to burn it. If the air is deficient, this means your engine will not be able to perform well. More carbon will be deposited on its walls, and it’ll smoke a lot. This could have a terrible effect on the engine’s lifespan. Your engine will start to malfunction, including RPM fluctuation. What’s worse? Your engine may knock out.

• Incomplete combustion: this doesn’t happen on its own. Incomplete combustion is caused by other man-made defects. These are blocked air filters, wrong engine valve settings, incorrect injection timing, and even rich air-fuel mixture. As you’d guess, they have ripple effects like the abnormal rotation of the crankshaft.

• Stale fuel: this often happens when a motorcycle has been abandoned with fuel in it for a long time. When fuel gets stale, it thickens and loses its potency. Therefore, it isn’t able to power the engine for proper functioning. The crankshaft is one of the places that take this hit. It either becomes unable to rotate or rotates abnormally.

• Degraded oil: when oil degrades, it loses its viscosity and potential as a lubricating agent. This will automatically result in increased friction between the components of the motorcycle. The engine will start to heat up, causing the crankshaft to suffer. You should change your engine oil every 5000-7000 miles so your bike’s performance won’t suffer.

Riders can avoid most of the causes of RPM fluctuation through proper maintenance. However, if you’ve passed the prevention stage, you do not need to panic. All of the above-listed problems have solutions. Apart from RPM fluctuation, what should you do when your idling RPM becomes too high or low?

It’s one thing for RPM to fluctuate. It’s another thing for it to suddenly become too high or low, and these are pretty dangerous scenarios. When your idling RPM becomes too low, it could cause your bike to stall. And stalling is not a good thing, as it could cause your motorcycle’s engine to knock. Apart from this, the oil pressure could reduce, making the oil less effective.

Also, when your idling RPM becomes too high, fuel consumption could increase. It could also lead to the wearing of the engine. High Idle RPMs are not just dangerous to bikes. They could pose a safety risk to the bike owners or other people around.

ALSO READ  Must Have Motorcycle Accessories

How to Correct a High Idling RPM

• Check the idle screw: this is the first thing to do when you notice a high idling RPM. It could be that your idle screw has shifted from its factory settings. Get your guide –if you still have it- and reset it.

• Check your motorcycle sensors: your idling RPM may suddenly become high if your sensors are malfunctioning. In this case, the best thing to do is buy new sensors. Some of the sensors you should check are the water temperature, oil temperature, and throttle position sensors. However, before purchasing a new throttle position sensor, examine it first. All it needs may be a slight adjustment.

How to Correct Low Idling RPM

• Check the idle screw: this is the first thing to check. Your idling RPM will also be low if your motorcycle’s idle screw is too low. Only one solution here- get your motorcycle manual and restore it to factory settings. If you don’t have it, ask people who use the same model as you.

• Low air-fuel ratio: if the mass of air to fuel is too low, it could affect the motorcycle’s engine. Examine your exhaust and air filter and replace them if necessary.

These are the two most significant after-effects of riding or idling at the wrong RPM. Redlining happens when your engine’s RPM becomes too low. Here, the engine does extra work to produce the required rotations. If your motorcycle enters the red line too often, it will reduce the engine’s lifespan.

Redlining may be bad, but lugging is worse. In this case, your motorcycle has exceeded the highest RPM it should be working at. The engine is simply doing extra work that is not needed. You should upshift your gear immediately after this happens. Otherwise, your engine could knock out quickly.

PrevPreviousPutting Stickers On Your Motorcycle? Should You Do It?
NextProtect Motorcycle Paint From Damage [Do This] Long LastingNext