How To Stop a Motorcycle – Use Front & Rear Brakes

There’s no such thing as a simple motorcycle accident. It can happen to anyone, anytime, anywhere.

Motorcycle accidents are among the most common vehicular accidents in the United States. They are typically associated with new riders who aren’t familiar with how to ride safely.

Whether you’re just learning to ride or already a pro, this article will provide you with the knowledge and skills you need on how to stop a motorcycle and avoid a potentially dangerous situation. 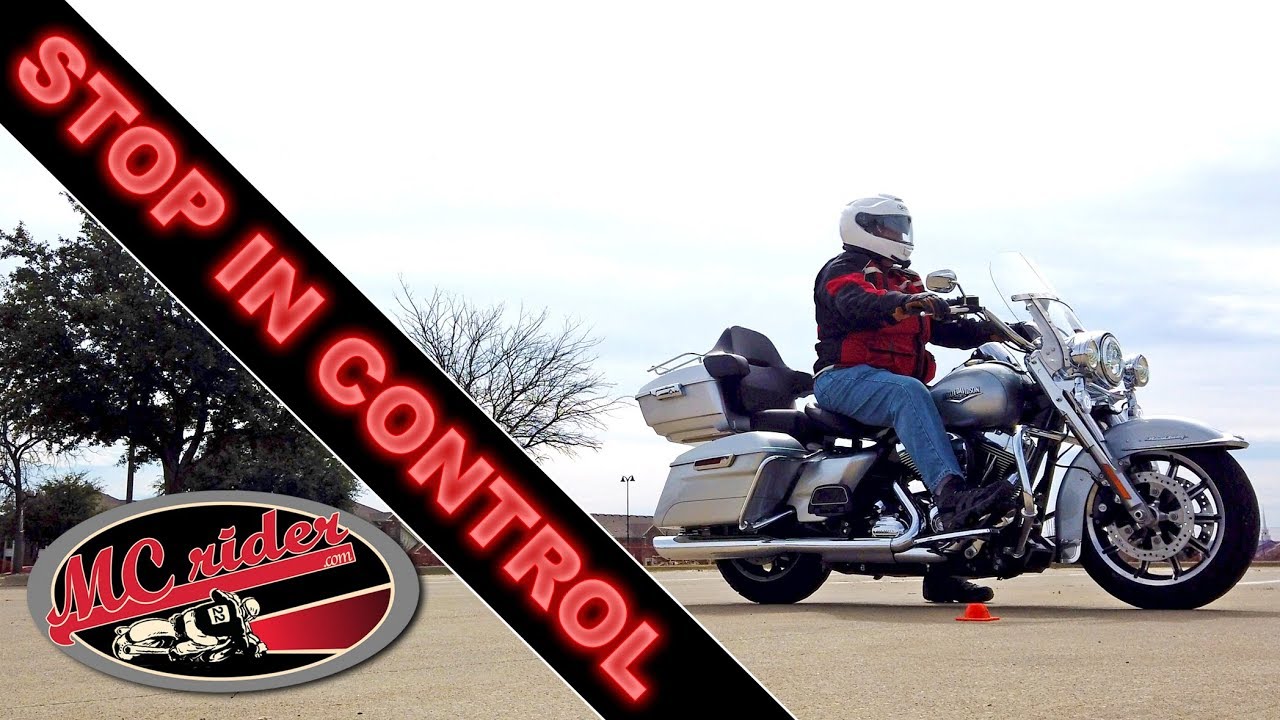 The right way to stop your motorcycle

This may seem crazy, but stopping a motorcycle is an essential skill that all riders must master.

To stop a car, you can either put gradual pressure on the brake pedal or slam on it if you’re in a panic braking scenario.

A motorcycle’s Braking is very different. A wrong angle on the brake can send a rider off into the air and cause a crash.

This is the first step because it’s usually the most neglected and often leads to a violent collision with another vehicle. You must look check your environment for potential dangers. An example of this is a distracted driver on a fast car coming up behind you.

As you approach an intersection or a traffic stop, roll off the gas and leave the clutch alone. The engine braking is causing the bike to slow down. You won’t need to step on the brakes if there aren’t any other vehicles around you and you’re still far from the stop line. You will be able to pull off a lower gear if you go slow enough as the light turns green.

ALSO READ  Are Motorcycles Expensive to Maintain? [Video] Cost To Own

3. Use the front and rear brakes

Leaving your clutch alone helps the engine brake slow the motorcycle down. Pulling the clutch first means you now have a heavy object with a momentum barreling down the road, making you reliant on the brake to stop the bike from moving.

Use both front and rear brakes. Sure, there are stories of riders wiping out in a corner after grabbing the front brake, but if you’re braking in a straight line. You have enough traction (except perhaps if you’re going through a slippery surface). Braking using the front wheel won’t be a problem. The rear brake’s function is to keep your bike aligned and balanced, but the front brake does most of the stopping.

I highly recommend using your index and middle finger when engaging the brake. You’re not gripping it too much and still can use the throttle when needed.

4. Pull the clutch, and downshift one gear.

Since you’re trying to reach a stop, your engine’s RPM will continue to drop; you will have to shift to a lower, more appropriate gear. If you suddenly let the clutch out, your bike will jerk since the engine speed is incompatible with the wheel’s speed.

ALSO READ  What does one per-center mean in motorcycle clubs?

5. Use the throttle to match the engine and wheel speed

Matching the engine speed with the rear wheel speed is the best way to help your motorcycle avoid jerking while downshifting. As you downshift, use your thumb to give the bike a small amount of throttle while the clutch is pulled in with your ring finger, then let the clutch out gently to engage with the drive train. If your bike has a slipper clutch, don’t worry about engine and wheel speed matching. Put your bike in the lower ear and drop the clutch, and the electronics will take care of the throttle.

6. Apply engine braking by slowly releasing the clutch between downshifts

This technique takes a while, but the result is a satisfying seamless downshift without causing the bike to unnecessarily jumping ahead due to excessive throttle or jerking (because the throttle isn’t enough).

Quick shifting is the best way to keep the engine speed without letting the speed drop too much with your clutch engaged. Using this technique will slow your bike faster, and you will need lesser braking force because of the help from the engine.

7. Downshift through all gears until you come to a complete stop.

You must slow down gradually when your bike comes to a stop and repeat the downshifts until you reach near a standstill. When doing this, it’s best to let out an extra push on the brakes.

Many motorcycles have a tall first gear, with the rest of the gears spaced closer together. When you first shift to first gear, you might feel like you’re going very slowly, and then in rapid succession, downshift through all the bags to second gear.

Within two to three seconds, shift from 6th to 2nd, release the clutch, and shift again. You don’t want to hold down the clutch and change through three to four gears in one motion because you might miss a shift to too high or too low gear.

ALSO READ  How To Adjust A Motorcycle Throttle Cable? Loosen Or Tighten

If you’re going fast enough for the clutch to engage the first time, the bike may skid and come to a sudden stop. Don’t do it.

8. Engage the clutch and go on first gear

Your goal is to be in the second gear as you approach the stop. Some bikes will jerk if you choose the first gear while the bike is in motion. So, just as you’re about to come to a complete stop, pull the clutch in, select first gear, and hold the clutch in.

Go easy on the front brake just as you come to a complete stop; this will prevent the wheel from losing traction and sliding.

Practice how to stop your motorcycle

It’s time to practice it. Don’t overthink it. Follow the 8-step process as you practice and continue to improve. When practicing, aim to stop your front wheel on a specific spot to enhance your motorcycle control.

If you’ve never ridden a motorcycle in traffic before, practice in an empty parking lot or on a private road first. You’ll have to pay attention to what’s going on around you in traffic.

How about holding the clutch and the brake at the same time?

Many riders practice this technique. However, it’s not advisable. The engine brake helps the rider reduce speed. If you don’t practice it, you’re causing your brake to work harder than necessary, resulting in faster wear and tear.

Once you’ve got it, you’ll find yourself in control of your motorcycle, which means you can ride your bike safely and more comfortably. I hope you’ve learned some things about stopping your bike, and I’m sure you will find it easy to understand. I hope you will keep learning and find this article helpful in the future. If you have any questions, I’m here to answer them.