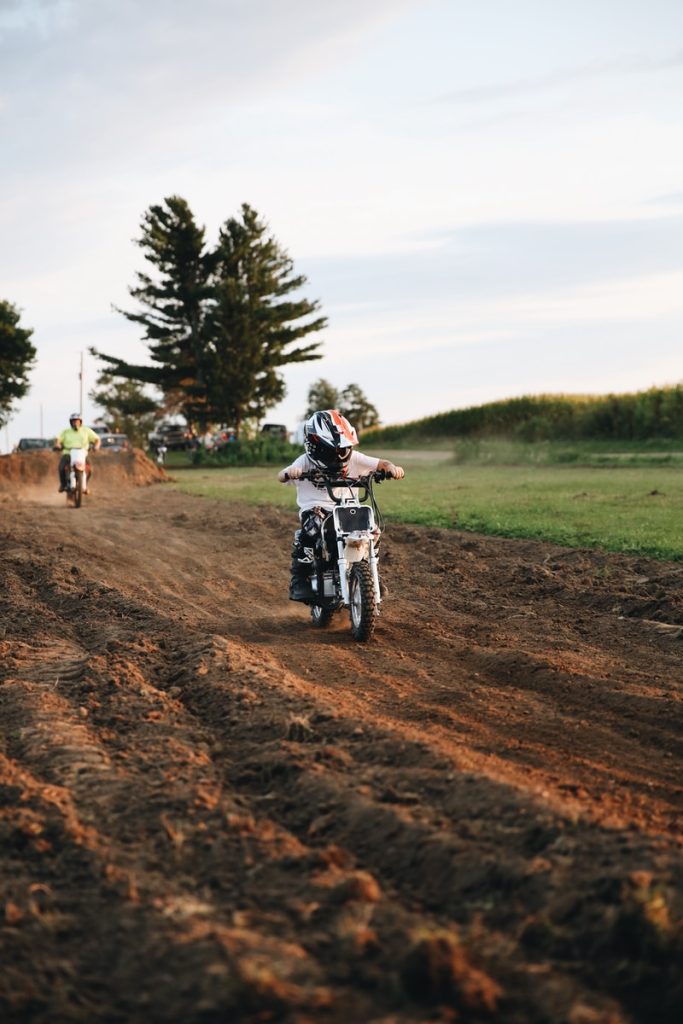 With the right gear and skill, anyone can ride a dirt bike. But how fast can a 110cc dirt bike go from zero to 100 mph?

It’s been called the most fun you can have without getting hurt, and dirt bikes are a perfect example of that. Sure, you can do much damage if you crash, but the fun part is the feeling of speed and control.

How fast can they go? Brand matters

Motorcycles with a 110cc engine are modest, and as such, we cannot compare them to the top speed of, say, a 250cc or 450cc. While the maximum speed of every motorcycle brand and model varies, a 110 cc dirt bike can put out 30 to 38 mph, while some can go 55 mph.

Dirt bikes are a great way to get into the great outdoors and enjoy the thrill of speed without having to spend thousands of dollars on an expensive motorcycle. The best part? You can find a dirt bike that fits perfectly with the budget of any level of rider. In this article, we’re going to answer a question often asked by many readers of our blog – how fast does a 110cc dirt bike go?”

When it comes to dirt bike racing, speed, agility, and skill are everything. This is the trifecta of a winning formula, but it would be ideal to start small if you’re a beginner. That option would be a 110cc dirt bike. Sure, it will not break any world speed, but it will undoubtedly give you the excitement and thrill of dirt bike riding.

ALSO READ  How To Change a Motorcycle Tire? Use These Tools

Why are some 110cc motorcycles fast while others are slow?

Many factors affect the speed of a motorcycle. These factors vary between brands and models. For example, high-performing machines are the Yamaha TT-R110E and the KTM 125 SX.

Another factor to consider when it comes to the overall speed is the rider’s weight. Of course, the heavier the rider, the slower the bike could get. The type of tires also affects the top speed. Then, the condition of the day (e.g., you are faster if you ride the tailwind) and the terrain you’re on.

Finally, the rider’s riding style, skill, and experience come into play which would greatly affect the top speed of a dirt bike.

If you’re new to dirt bike riding, it’s always a good idea to start with a smaller displacement; they have less power, are easy to handle, and have less weight. These characteristics make a 110cc perfect for riders who might still fear riding fast on rough terrain. Just a reminder, though, whether you’re a beginner or an advanced rider, always wear proper riding gear. After all, wearing a helmet can save your life.

Getting the Right Bike For You

Remember, tops speed isn’t everything. The best way to choose your first dirt bike is to holistically look at the entire performance specs. You can begin by asking yourself which models have the best frame,  best suspension, bearings: top speed, and parts availability.

There are many different models of a 110cc dirt bike. Here are some options you can consider:

ALSO READ  How to paint a motorcycle helmet? It's Easy With these steps

These are just a few examples of dirt bike models. Remember to check the riding gear you’ll be using to ride the bike. If you’re planning to use a helmet, it’s best to choose one with a snug fit.

It’s always a good idea to practice riding in the dirt before buying a dirt bike. There are many dirt bike trails in your area that you can practice on.

A 110cc dirt bike is not fast, but do remember that, if you are a beginner dirt bike rider, skill development and experience play a more critical role in the first stages of your career. Think of the 110cc as your training bike to prepare you for a bigger, better, and more competitive riding.

We hope this article answered the question of how fast does a 110cc dirt bike goes.

Thank you for reading, and always ride safe.

PrevPreviousWhat Percentage of Motorcycle Riders Get in Accidents?
NextHow Much Is My Harley Davidson Jacket Worth? Value EstimatorNext