Can You Put a Motorcycle on a Hitch? [Pros and Cons + Tips] 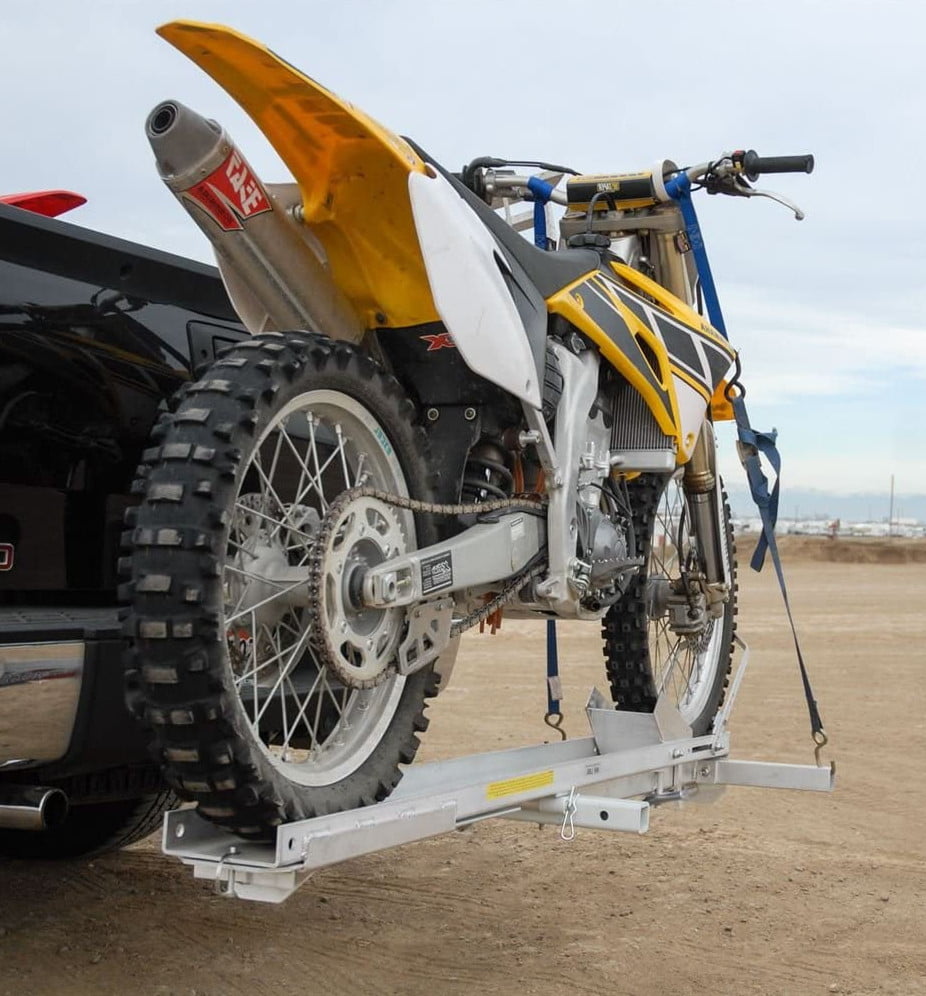 If you’re a frequent motorcycle rider, you’ve probably considered what would happen if your motorcycle broke down far from home. You’d have to call for help, but how would you go about getting it? The solution is simple: hitch your motorcycle!

Yes, you can put a motorcycle on a hitch, but it’s not as simple as loading up your vehicle. You’ll need to use a hitch-mounted carrier specifically designed for motorcycles like in this video:

They’re available in several different styles and sizes, so you’ll want to choose one that’s appropriate for the type of bike you own.

If you follow the manufacturer’s directions regarding weight capacity and installation, a hitch-mounted carrier can be as safe as using a trailer — but with greater convenience of installation. They also take up less space than trailers.

Can You Put a Motorcycle on a Hitch?

First, let’s clear up some misunderstandings. When people think of “hitching” their vehicles together, they normally picture one trailer hitch attached to another vehicle so that both can be towed by the same tow truck.

While this is conceivable with automobiles and trucks (and even some larger RVs), it is not viable with motorcycles since the hitch hookup requires too much room between them.

Consider using a trailer instead of trying to hitch your motorcycle as if it were a bicycle or other tiny object. This will allow you to secure all four wheels while keeping them upright and safe while driving along long stretches without having to worry about how much weight each wheel has previously carried.

However, if you comply with the manufacturer’s guidelines regarding its weight capacity and installation, hitch-mounted motorcycle carriers can be as safe as using a trailer with greater ease of installation, convenience, and extra space available.

The pros and cons of hitch-mounted motorcycle carriers are as follows:

They are less expensive than trailers, which can run into thousands of dollars. If a trailer is out of your price range, you might want to consider this alternative. A hitch-mounted carrier, at roughly $200, will still be more expensive than the ordinary bike rack.

Even though it’s less expensive than a trailer, it’s still a significant expenditure when compared to other types of racks — and the lack of suspension makes them less stable when traveling over bumps or particularly uneven terrain.

If you’re in a location where dirt roads are common, this solution might not be right for you unless your bikes are light enough to not bounce around too much during travel (and preferably short enough so as not to strike other objects along the road).

Hanging two motorcycles from one set of bars is easier than connecting them up separately on separate arms. But if one bike falls off during transit due to tilting or shifting (which does happen), both bikes will crash down together onto whatever surface is under them at the moment.

This is especially true when towing heavier touring bikes with a longer wheelbase. When both wheels are carried onto one rack arm rather than two separate ones, there isn’t much clearance between them (which helps prevent bottoming out).

Here are some related videos to watch on YouTube:

How to Transport Motorcycles Using a Tow Hitch

If you’re going to be transporting motorcycles using a tow hitch, there are some things you should know before attempting it:

Local governments may have regulations governing how and where motorcycles can be towed on the highway. Before attempting any type of motorcycle transportation, make sure to verify with the authorities in your area.

You’ll want to make sure that the weather is suitable for motorcycle transportation. For example, if you live in a region where it rains regularly at certain times of the year, it might not be a smart idea to try transporting a bike around while visibility is limited because of fog or rain.

Make sure your trailer and vehicle are capable of hauling whatever load they need to carry, in addition to reviewing regional regulations and weather conditions. This includes everything from hitch weight limits to how much extra weight each vehicle can handle while being used in this operation.

While some people tow their motorcycles behind their trailers, it is not usually advised. It is best to err on the side of caution while moving your motorcycle with a hitch.

Make Sure There Is Enough Room

Make sure there are no signs stating that heavy or oversized cars cannot pass through an area before attempting to tow anything behind them. This is to ensure that there is enough space for your vehicle and auto carrier, as well as other vehicles in front or behind yours. Watch out for signs about low bridges too.

Ways to Transport Your Motorcycle

You can transfer your motorcycle in a variety of ways, from renting a trailer to hiring a tow truck. If you’re in the market for a new motorcycle and want to save money on transportation, consider using a motorcycle carrier or trailer.

If you own numerous bikes and plan to move them regularly (or if you want the added security that comes with having your bike locked), one of these options may be worth considering.

Custom-made hitch carriers that attach directly to your vehicle’s hitch receiver are available from some manufacturers. Depending on the type of vehicle they’re installed on, these carriers come in a variety of shapes and sizes.

This option is often used by people who have trailers full of cars or motorcycles when traveling long distances because they provide stability while allowing drivers more control over their vehicles during transit time.

These kinds of vehicles have large tires designed specifically for transporting cargo like motorcycles without damaging them during transportation. However, they don’t usually go fast enough when driving under normal conditions. Most people use them only as a temporary solution until something else comes along.

They attach directly onto truck beds so riders can carry more than just themselves around safely at all times.

These types usually offer more storage space than other types. It makes sense since they’re meant specifically for hauling things around rather than just carrying passengers back and forth between destinations.

Conclusion – Putting a Motorcycle on a Hitch

Motorcycle carriers with hitches are a terrific solution for some, but they aren’t for everyone. I don’t advocate towing your motorcycle with a hitch. It’s simply not safe, and it can harm both your bike and car.

Consider other choices, such as a trailer instead of using a tow hitch to carry your motorcycle. If you want to try out this mode of transportation, make sure you do your homework and choose a high-quality product that will keep you and your bike safe on the road.